One of the ways we fund Scholarships and other charitable works is through members volunteering their time and talent.

Members fundraising at the BOB

Corey O'Donnell $1,000.00 Corey is is a member of St. Margaret of Scotland Parish and a graduate of the Charter School of Wilmington. Corey plans on studying Electrical Engineering at the University of Delaware. Corey received a number of academic honors in addition to achieving the rank of Eagle Scout in the Boy Scouts of America. His community service and volunteer activities span many years and touch on nearly every aspect of our community.

Dierdre Holmes $500.00 Dierdre is also a member of St. Margaret of Scotland Parish and a graduate of Mother of Divine Grace School. She plans to study nursing and is choosing between a number of fine schools. Her volunteer service includes counseling, tutoring and assisting in the care of handicapped.

Jennifer Armistead $500.00 Jennifer is a member of Holy Family Parish and a graduate of Caravel Academy. She plans on studying Nutrition at the University of Delaware, with the goal of being a Registered Dietitian and work in Pediatric Nutrition. In addition to many academic honors, she has many hours working with the youth program at Holy Family Parish and working with intellectually disabled children.

Once again, join us in congratulating all of this year's scholarship recipients!

Applications for the 2018 James P. Brennan Academic Scholarship will be available soon!

The recipient of the 2017 Scholarship was Joseph Pritchard, a member of Holy Family Catholic Church and a graduate of St. Elizabeth's high school. Joseph is attending the University of Delaware. Congratulations Joseph! 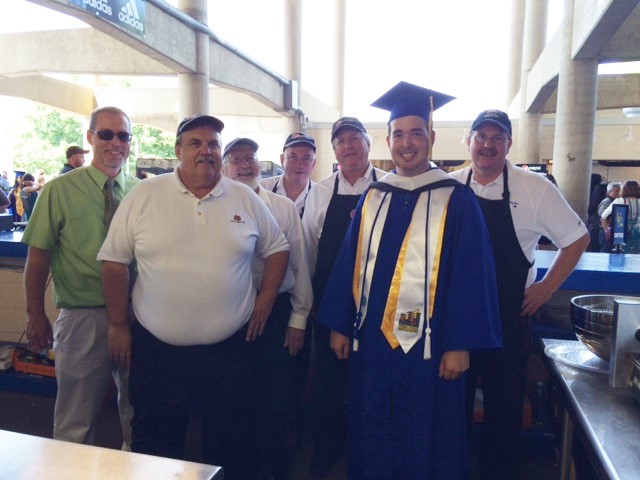 Shawn Butler (2nd from right) pictured with members of the Division at graduation.
The first recipient of the James P. Brennan Academic Scholarship, Shawn Butler, graduated from the University of Delaware this past Saturday!
Shawn demonstrated one of the reasons he was chosen by the fact that he graduated in only three years. That shows tremendous dedication and work ethic.
Shawn plans to continue his studies at Graduate school at Binghamton University in Binghamton, NY.
Both his parents, Sharon and Mike are very proud of his accomplishments. Sharon stated, "We owe the Hibernians many thanks for helping to fund his education." After seeing the works and purpose of the Division, Mike Butler became a member of the division following the awarding of the scholarship.
Division members have volunteered at UofD graduation for a number of years and Shawn was gracious enough to stop by our booth to share his good news.
Please congratulate Shawn and his parents!

The Scholarship Committee considered several qualified and worthy applicants and is pleased to announce this year's recipient is Ms. Colleen Draper!

Colleen is an active member of Holy Family Catholic Church and is an honor student at Cab Calloway School of the Arts. She will be attending Goldey Beacom College in the fall, studying Business.

In addition to her academic success, her accomplishments and community volunteering activities include:

Please join us in congratulating Colleen on her much-deserved scholarship!
The Newark AOH Scholarship has been renamed the James P. Brennan Scholarship in honor of a deceased member of the division. 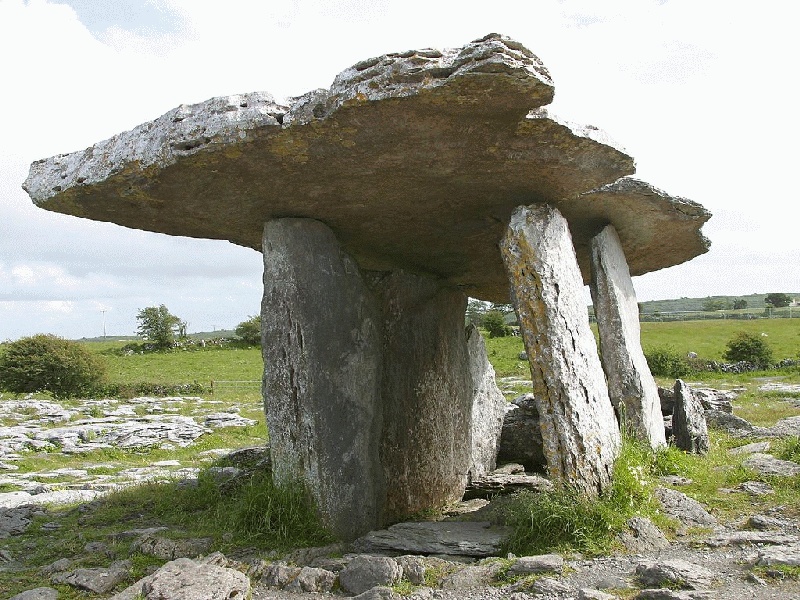 Examinations of the genomes of Irish individuals from prehistoric times reveals where migration to the Emerald Isle originated. Click here to read the article, which includes links related to the actual study published in the Proceedings of the National Academy of Sciences.

The Halloween custom we have come to enjoy has come a long way from its origins in Celtic Ireland. Once a serious Pagan holiday, we have transformed it into a fun, party holiday. The holiday originates from a 2,000 year old Celtic festival call Samhain. Samhain, pronounced sow-wen, is a Celtic word meaning "summer's end." It is also the Irish Gaelic word for the month of November. Samhain is the last harvest festival as well as the end of the year on the Celtic calendar. Ancient Celts believed that the on October 31st, the dead mingled with the living. The Celts lit bonfires in honor of the dead and to keep them away from the living.

On the Halloween holiday all manner of beings are playing about and mixing with the living; ghosts, fairies, and evil spirits. Children and adults wore Costumes and masks to mimic the evil spirits or placate them.

Samhain became "the evening of All Hallows". Traditional activities for Halloween include costume parties, Jack-o-lanterns, trick-or-treating, reading scary stories and providing special foods. Irish immigrants carried versions of these traditions to the Mid-Atlantic region of North America in the nineteenth century.

One food tradition is the Bram Brack Cake also known as Soul Cakes. During the Medieval era of Ireland, children would go from house to house singing songs and asking for Soul Cakes. For each cake gathered, they would then say a prayer for a deceased loved one from the family who gave the cake. These prayers helped lost souls or those in purgatory into Heaven. Many historians believe this may have been the beginning of our modern day trick'or'treaters.

Bram Brack is a special fruit cake or bread baked and handed out at Halloween. In Wilmington, the Irish Americans make these tasty treats for adult and children Halloween parties. Wilmingtonian tradition says that each member of the family or friends gets a slice. The slice might contain another treat; such as a coin, ring or piece of rag. Tradition has it that each represents a sign for the future. A coin will give a prosperous year, a ring is a sign of romance or marriage, and the rag brings a bad financial future.

1 each of Halloween gifts (a small ring, rag, and coin wrapped in parchment paper).

3) Beat well with an electric mixer for about 5 minutes. The dough should be stiff but elastic.

4) Fold in raisins, currants, and candied fruit or peel. Add the Halloween gifts and mix well. Cover with a cloth and let rise in a warm place until dough has doubled.

5) Divide dough in half and place each in a greased 7" cake tin. Cover pans and let dough rise again for 30 minutes.

7) Glaze cake tops with 1 tablespoon honey dissolved in 2 tablespoons boiling water and return to oven for 3 minutes or so to set glaze.

Warning: The Halloweens gifts could be small enough to choke on. Make sure everyone is aware that these little gifts are in the cakes. Supervise children if they are eating or poking through a piece in search of these extra treats.

Enjoy a great meal with great friends and McGlynns will donate 10% of the night’s profits to LAOH St. Brigid Division. Just print the above flyer and bring it with you! It couldn't be easier to support them. Funds raised by the Ladies Ancient Order of Hibernians goes to support worthy charities.

Amanda was Valedictorian at Appoquinimink High School and she plans to major in Biology at Georgia Tech in Atlanta. Her volunteer work includes work at Bunker Hill Elementary School, Square Dog Ranch, and as a Catechist at St. Margaret of Scotland and St. Joseph's parishes. She was also Vice President of FFA, member of the National Honor Society, French Honor Society, National Technical Honor Society and Science Olympiad as well as school-spnsored clubs. Please join the division in congratulating Amanda!

This year, the division also awarded scholarships to two runners-up:

Erin Jones from Holy Family parish and Newark High School. She volunteers for Vacation Bible school, as an Alter Server, and with the Giving Tree. She's also involved in Math League, Chorus, Student Government, Locks of Love, The Food Bank, and Dance (including Irish dance)

The Division is proud to honor and reward local youths who excel at academics as well as give back to their communities!

Free tours will be given on the hour at 12pm, 1pm, 2pm, and 3pm. There will be Irish music by Converse Crew, and refreshments! Bring your family our for this grand celebration! This year-long exhibit features photographs, letters, furniture and other artifacts, some of which have never been on display. Also featured will be Bessie’s presentation gown worn when she and her brother were presented at the Royal Court of King Edward VII at Dublin Castle in 1903. The dress, covered in shamrocks, along with her written accounts of the event are a charming glimpse into the Irish aristocracy.